Enter your City name or Pincode

Weekends are a great way to have lots of fun with family and friends. The best way to rejuvenate oneself is to venture out and visit the nearby location situated close one ones residence. There are several places near Balachaur which are located at close proximity to the city and can be visited easily. Read on to find more about the places which can be visited during any weekends or during holidays with your near ones.

Nawanshahr also known by the name Shaheed Bhagat Singh Nagar is a major district in Punjab. Nawanshahr which means" new city" is a place which is close to Balachaur and can be an ideal destination for a weekend gateways or can be traveled during holidays. This is because it is home to number of Gurudwaras and temples . The two most important Gurudwaras which are situated here are Gurudwara Charan Kanwal and Gurudwara Gurpartap. Gurudwara Charan Kanwal was built in the memory of Guru Hargobind Singh Ji who is the sixth Guru of the Sikhs. It was made by Maharaja Ranjit Singh. Gurudwara Gurpartap is situated in a village named Chak Guru. Guru Teg Bhadur had visited this place and even got a well dug here when he saw that there was shortage of water. Both the Gurudwara have historical significance and are quite old. The architectures of both the Gurudwara are very attractive and great to look at. 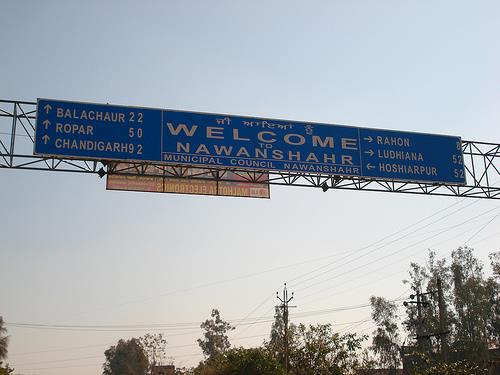 Nawanshahr
Other places of religious importance include Suraj Kund, Baba Balraj Temple, Sanehi Temple and Kirpal Sagar amongst others. It is said that in the whole of India there are two and half kunds and Suraj Kund which is related to Shri Ram Chander Ji is one of them. This is an important place of pilgrimage and many devotees are seen to visit the place every year. Baba Balraj Temple is also a great place to visit and offer prayers. It was built in the year 1596 by the son of Baba Raj Dev. It is said that before the historic fight between Sher Shah Suri and Himayun, Sher Shan Suri had come here to seek blessing of Baba Raj Dev. When in Nawanshahr, one should not miss visiting Kirpal Sagar. This is the place which has been built to show the unity of all religion i.e. Hindu, Muslim, Sikh and Christians. Here people from all the religion come and pray. There is a pyramid in between where a common symbol signifying all the four religion is under construction. There are several hotels and restaurants in Nawanshahr. One can book hotels beforehand and can even take the assistance of travel agents who will book hotels and also make arrangements for traveling around the main tourist destinations.


How to Reach Nawanshahr ?

Nawanshahr is located at a distance of 21 km from the city of Balachaur. Regular transport in the form of buses both private and public transport run between the two cities. The time to reach Nawanshahr is approximately 30- 40 minutes from Balachaur.


Plan Your Tour to Rupnagar near Balachaur

Rupnagar an ancient city, founded in the 11th century was named after the son of Raja Rokeshar. Earlier known by the name Ropar, Rupnagar is a very important archaeological site. As per recent excavations, it is believed to be part of Harappan civilization. Anandpur Sahib Gurudwara, Gurudwara Bhatta Sahib and Gurudwara Parivar Vichhora Sahib are a must visit when here. Gurudwara Keshgarh Sahib that is present on Anandpur Sahib Gurdwara complex is the most important religious place of the Sikhs in Rupnagar. The shrine is situated on a hillock and visitors need to climb up to reach here. 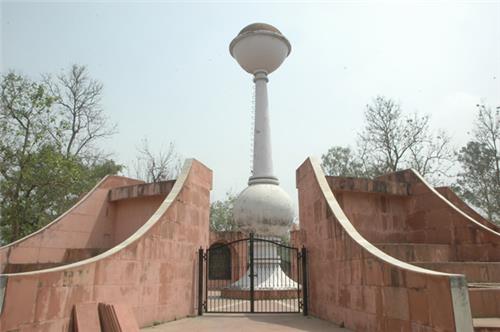 War Memorial Ranjit Singh Bagh
Gurudwara Parivar Vichhora Sahib is the place which was inhabited by Guru Gobin Singh and his family after they had moved out of Fort of Anandpur Sahib. There is a canal near Nagal Sirsa village. This Gurudwara is just near to the canal. One has to climb about 84 steps to reach this Gurudwara which is located uphill. Then comes Gurudwara Bhatta Sahib which was built in the memory of Sikh Guru Gobin Singh. When the Guru was followed by enemies he had had come to the village of Kotla Nihang to seek shelter. A Gurudwara was later build here in the memory of the Guru. Apart from the Gurudwaras, one can also visits the ancient temple of Jateshwar Mahadev Temple. It was built by a villager named Jai Dayal Sharma in the village of Takhatgarh. This temple which is almost 100 years old was built on an old temple site. It is assumed that the original temple belonged to the 10th century. Devotees not only from Punjab but also from Himachal Pradesh and Haryana visit the temple quite often. Mondays are the most crowded especially during the sawan months. A big fair is organized here every year on the occasion of Shivratri.

There are places of natural beauty also in Rupnagar. Nanagal is one such place which is situated at close proximity to the city. It is a great tourist spot and preferred by many as there are river, hills and canals. On River Satluj one can see the construction of the multipurpose project Bhakra Nangal Dam. Other projects such as Nangal Hydel Channel, Nangal Dam, Kotla Power Houses, and Ganguwal can also be seen here.


How to Reach Rupnagar ?

The distance between Rupnagar and Balachaur is 26 km. The places can be easily reached using any local modes of transport. Buses ply between the two cities at regular intervals.


Take a Trip to Una near Balachaur

Una though a tiny place is a popular tourist destination in the state of Himachal Pradesh. This place has several Sikh and Hindu temples. It is a vibrant region is right blend of culture, tradition, impressive landscape and history too. The great weather of the city makes this place a great tourist destination all year round. The Gurudwara which has been named after the Sikh Guru Dera Baba Bharbhag Singh, is an important place of pilgrimage of the Sikhs. It is said that the Guru had extraordinary healing powers. This Gurudwara is located on a hill with picturesque background. The rejuvenating environment here is ideal for relaxation and warmth. The priests are said to cure any mental ailments during a fair that is held on all years in the month of February. 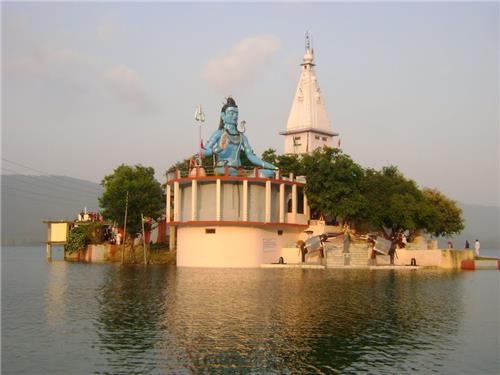 Temple Baba Grib Nath (Androli) Una
Chatpurni temple and Dera Baba Rudru temple and Mahadev temple are popular places of pilgrimage for the Hindus. Chatpurni temple dedicated to goddess Chatpurni is a famous temple and a popular Shakti peeta. Every year during the month of August, a colorful mela is held every year. For the benefits of the tourists, Himachal Pradesh tourism has also set up a Yatri Niyas which takes care of accommodation of the tourists. The main deity in Dera Baba Rudru temple and Mahadev temple is lord Krishna and is a must visit for not only Hindus but also people of all religion. Una is a place which is famous amongst solitude lovers and peace seeking tourists as it is far away from the hustle and bustle of city life.

Una is well connected via roads and railways from Balachaur. The introduction of broad gauge railway has resulted in movement of lots of trains in the region. Hence reaching Una which is located just at 51Km from Balachaur should not be a problem.

Chandigarh, is a prominent city because of its landscape and architecture. It is a paradise of used things because of the rock garden that is present there and also the heart of Punjab. It is a planned city with lots of greenery and lakes all around. Thus tourists when on a visit to this beautiful city, spend good time in such pollution free environment touring all the tourist places which the city has to offer. Amongst various sightseeing options, Rock Garden, Sukhna Lake, Zakir Rose Garden, The Open Hand, Chandigarh Museum and Art Gallery, Pinjore Gardens, The Chandigarh Museum and much more are quite famous and visited by large number of tourists from across the country. 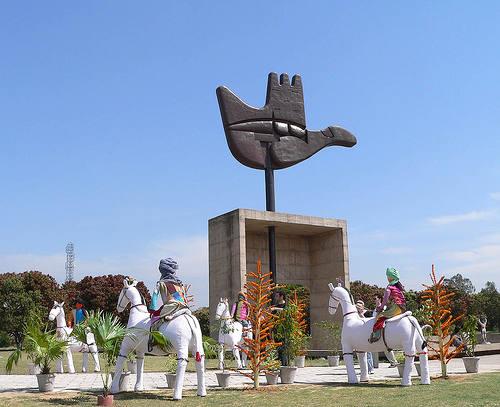 Rock Garden
Sukhna Lake which is a man made lake is located in the foothills of Shivalik range. The lake which is approximately 3 Km long has lot of water activities such as water skiing, boating, yachting and so on. This is also a place for bird lovers. During the time from December to February one can see not only various types of domestic birds but also birds from Siberia and Central Asia. Mostly people visit the lake for some quite time amidst beautiful surroundings. Apart from Sukhna Lake, there are other places too which are a favorite place for nature lovers. Zakir Rose Grden and Pinjore Gardens are two such places which are a great place to visit too.

Zakir Rose Garden is set up on a large area of 27 acers. One can get to view about 1600 varieties of roses here. Annual rose festival which is held every year attracts large number of tourists from all across. Pinjor garden is also one such place which is a must visit. It is set up on a huge area of 100 acres and has a plant nursery, mini zoo and also a Japanese garden. Chandigarh is famous for Rock garden which attracts a large number of tourists due to its unique concept. This garden which has been created by Nek Chand contains various art forms made from discarded materials such as bulbs, broken bangles, broken tiles, auto parts, forks, metal wires and such other items which are generally thrown away. When in Chandigarh this is a must visit as it will give you an idea as to the various things that can be made using discarded materials.

If you want to have a look at things which are rare and belong to historical times than you can visit Chandigarh Museum and Art Gallery and The Chandigarh Museum. In the former one, visitors can get a view of paintings, artifacts, coins belonging to the Harappan civilization. Fossils of dinosaurs can also be seen here. The Chandigarh Museum on the other hand shows how the city of Chandigarh came into existence.

Among the most significant and eminent monuments in Chandigarh, the Open hand is very famous and is made of metal sheets. The open hand revolves continuously and indicates the direction of the wind. It is also used to convey a message of brotherhood and peace. The open hand symbolically means "open to receive" . Apart from the above the city has much more to offer. There are lot of hotels to stay. Chandigarh has some of the finest restaurants serving mouth watering delicacies which the visitors can experiment.


How to Reach Chandigarh ?

Since Chandigarh is a major city, it is well connected to rest of Punjab and the country via good network of roads and railways. It has a railway station as well as an airport. From the railway station you will get trains to all the major towns of Punjab and also to other states. Regular flight service connects Chandigarh to other parts of the country. Chandigarh is also accessible via road. It is located at a distance of 64 Km from Balachaur.

The above list of places will give you an idea about the tourist destination near to Balachaur. Choose the one that suits your preference and pack your bags for a great trip ahead.


Explore more about About Balachaur

Are you a Business Owner?

Add the products or services you offer